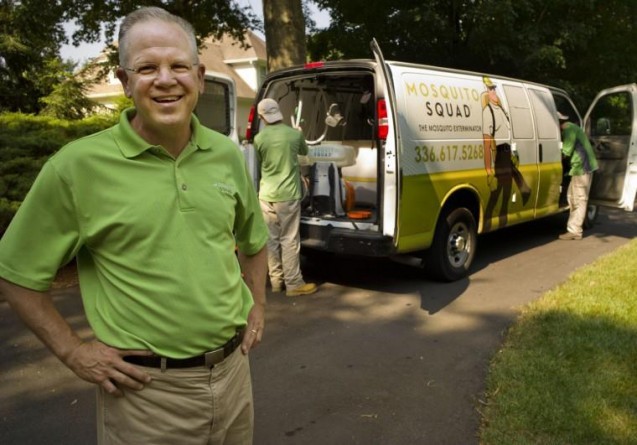 Mosquito Squad is America’s largest mosquito elimination and tick control brand. The franchise company operates in thirty states from California to Maine, plus the District of Columbia. “We protect families and pets from the danger and nuisance of outdoor pests, and give them the space to create memories,” says Hugh Jones, whose franchise battles bugs in North Carolina’s Triad region of Greensboro, Winston-Salem, and High Point. The company gave Jones its President’s Award for Outstanding Achievement for 2013.

The company’s 496% growth over the last three years earned it a spot as one of the top 15 franchise systems on the Inc. 5000 list of fastest growing companies in 2013. Mosquito Squad and its parent company Outdoor Living Brands sum up their core values with the acronym LIVE WELL—which stands for Lifestyle, Integrity, Visionary, Enriching Lives, World Class, Enthusiasm, Leadership, and Laughter.

Jones’ Mosquito Squad of the Triad is just one of the many franchises who have partnered with AnswerConnect to handle their calls and stay in touch with current and future customers. In fact, we are the corporation’s official recommended vendor for live answering service. “AnswerConnect allows me to focus on my operation and have an engaged person answer every call,” Jones says. “Their systems are refined and accurate. Without exception, they are attentive, professional, and interested in growing our business.”