Like most people, Michael Beck worked for his share of bad managers. Unlike most people, rather than swallowing the abuse or settling for a mediocre job, Beck left to forge his own executive development company, based on improving organizational leadership and creating corporate culture. With the majority of American workers emotionally disconnected from their jobs, Beck helps his clients and their organizations consciously create the types of culture that encourages connection, job satisfaction, creativity, and workplace happiness. “I believe people really want to do a good job,” Beck says. “…You need to appreciate what a strong culture can do to your bottom line.” 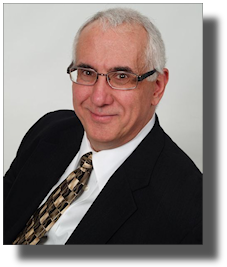 I love working with executives and helping them succeed. I love my clients because they’re all about improving who they are. We’ll work on leadership competencies—everything from improving communication to helping them develop other people to creating more of a vision for their organization and learning how to express it effectively. I also work with conflict resolution. If they’ve got a more junior member of their leadership team who they’re having trouble with, we’ll strategize about how to help that person improve.

The other thing I do with my clients is to help them with strategy—either corporate strategy or career strategy or something to do with their business; a market direction or sale or acquisition.

How did you enter this practice?
In the job-part of my career, I worked for some folks who I felt were not very good leaders. I thought they did a poor job leading, and I felt they mistreated people. I really wanted to make a difference by helping leaders become more effective and treat people better. I believe people really want to do a good job and often, if they don’t do a good job, it’s not because they’re incompetent, but rather one of two things: They’re either in the wrong role for their strengths, in which case a leader needs to help them move, or they end up doing a poor job because they become de-motivated by poor leadership.

What you’re saying seems like the inverse of the old Peter Principle.
The Peter Principle has some validity. I’ve worked with people where they were promoted beyond their capabilities, and then unfortunately, they didn’t get the right developmental support. So they struggle and fail.

But I’m not really talking about that when I say “People are in the wrong roles for their strengths.” I’m talking about natural competencies. For instance, some people are more creative than analytical. An easy example of a poor fit would be a creative person becoming an accountant.

Describe how you teach how to “capture hearts and minds.”
Capturing hearts and minds of folks is about resonating with people, learning how to have a vision, and how to project that vision, share it, and communicate it effectively. There’s a natural order that emerges out of that. The people who align with that vision will be invigorated and those who aren’t will gravitate away from the company. As it becomes more and more apparent externally, you attract new people to your management and staff who are aligned with that vision and are engaged with it. That’s how you capture hearts and minds.

Over the years, I’ve been asked “How do you motivate people?” How people might interpret that question is “How do you get people to do what you want them to do?” And the answer to that question is, “You can’t”. They need to be self-motivated. If you always have to poke and prod in order to get them to work, they’re the wrong people. When you get the right people on your team, they’re self-motivated. Something about you as a leader, something about the vision of the company, the culture of the company–those things resonate with those folks and they become self-motivated. They’re happy to be part of what you do.

How do you create corporate culture?
I’ve been having an ongoing conversation on LinkedIn about culture. Every organization has a culture. Sometimes it’s by default and sometimes it’s by design. If you don’t craft a culture, one emerges regardless, and usually it’s dysfunctional.

Why would a company’s culture, in the absence of conscious direction, default to dysfunction?
A designed culture is crafted around values that everyone agrees are important. Those might be things like treating one another with respect or a having a commitment to excellence. They’re strong, positive values. If you don’t have those values in place and live by them, then people’s dysfunctions are tolerated. Without a designed culture you end up with a culture in which dysfunction becomes acceptable. In my experience, the majority of companies operate like that.

The third side to this coin—it’s weird coin—is that if you design a culture and then you don’t live by those values, it actually acts as a de-motivator. It throws the whole integrity of leadership into question. Part of that equation of culture—of having an impactful culture—is to be diligent about living by it. That means calling people out when they do something that’s not in line with the culture or making decisions that depart from that culture. Those are de-motivators.

Conversely, when you have a good culture and live by it, there’s an integrity about it. It always leverages the results of the organization. They are many examples of companies that have good culture. One that comes to mind is Zappos.

They started early on and continue to be completely focused on good customer service. They embody this culture by living it and the results are spectacular. Can you imagine a company selling shoes online and generating over $1 billion a year? It’s crazy. You need to appreciate what a strong culture can do to your bottom line.

How do you get a company, whose raison d’être is profit, to turn their attention to culture?
I was able to do that with a client recently. They had done a number of employee surveys over a couple years and gotten a consistent message of disconnection with leadership and a feeling of a lack of fairness. It became apparent that there was poor communication and no set of values that everyone was being held to.

The point I made to their CEO was that corporate culture by itself doesn’t work. It’s a waste to have a mission statement because your company doesn’t live by it. If you’re going to do it, you have to commit to living it. If you have a culture and you don’t live by it, it’s a de-motivator. So if you’re going to go through the effort of creating a culture, you’ve got to commit to holding behaviors accountable to that culture, to making decisions in-line with culture.

My recommendation was to form a cross-functional team to define cultural values. So they started doing it and they’re starting to get great results.

What’s the biggest challenge to helping C-level executives become better leaders?
The thing that’s most frustrating is that they’re very busy. They don’t always have time to implement the things that we’ve agreed to. That can be frustrating. And things come at them very quickly. One week a certain topic is on the forefront of their minds. Then a week later, there’s an emergency and they’re focused on a new topic.

Does that affect how you coach strategic thinking?
Have you seen this [Time Management] graphic? It’s four quadrants. The Y-axis is “importance” and the X-axis is “urgency:” 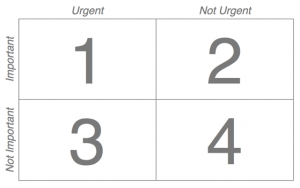 I’ll ask people “In your ideal work day, what quadrant do you want to spent the most time in?” A lot of people will say “I’d spend it in the ‘Important’ and ‘Urgent’ quadrant.” That’s the wrong answer. Things that are both “important” and “urgent” are what we call “fires”. Spend time there, and you’re putting out fires all the time. In the ideal world, you want to spend time on “important” tasks before they become “urgent.” Now we’re talking about strategic thinking.

What makes your job great?
It’s the best when you love what you do. I love my clients. I love the conversations that we have. I love the marketing of the business.

You must’ve been a terrific student.
[laughs] Yes. I was!