George Whittam founded ElDorado Recording Services, an L.A.-based company that supports voice-over studios and actors. The last film trailer you saw? Whittam probably helped that voice-over actor do their job. “When we get on a phone call, people are stressed out or confused or overwhelmed,” he says. “I get off the phone in an hour, and it’s a completely different situation. They’re relieved, they’re excited, they’re ecstatic, they’re know what they have to do, and it’s not as difficult. I really do like that.” 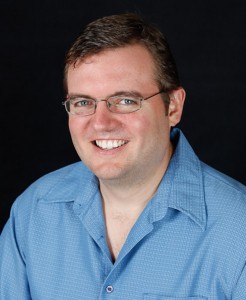 Tell me about ElDorado and what you do.
ElDorado Recording Services serves the voice-over industry. There’s a world of voice actors who record their voices in their home studios, and then send that file off to a client. That can be anything from a corporate training video on the internet to, say, a commercial for The Simpsons.

The top-earning voice actors in L.A. are easily making $2 million+ a year doing voice-over. It’s amazing. We make sure their home studios are working properly and keep them tuned up, and I teach people how to use their equipment as well. If something goes wrong, they have to reach me as quickly as possible. For some people, their responsibilities are extremely time-sensitive, and they might have to have a job turned around in 20 or 30 minutes.

It’s interesting work. It’s sort of like IT and a bit of teaching.

Does a lot of voice acting rely on technical know-how?
A lot of voice actors come from radio, in which case, they have a more technical background. But many of them, especially in L.A., are actors first. They’re SAG actors; they’re not technical at all. The vast majority have to be based out of their home studio. They’re being forced to run a home studio and voice-act at the same time, and that’s difficult. My job is to make it as simple and easy to do as possible, but still produce professional-quality audio work at the same time. It has to be simple, repeatable and reliable.

How did you get into sound engineering and studio consulting?
I studied music and audio technology at Virginia Tech. I’ve always had an interest in audio and sound and music. I graduated with a degree in music. I started business in ’98 with the idea of doing recording. I was just doing recording out of my house, recording bands around town—lots of my friends were musicians. I ended up moving to L.A. in 2004.

I used to work at a radio station. I did a wide range of stuff in the audio field: sound mixing, remote radio broadcasts, live sound, houses of worship sound and recording, remote recording, almost every aspect of professional audio. When I worked with a couple voice actors, they called their friends. It was completely word of mouth. It still is today: My vast majority of clients are referral-based.

The turning point was when I worked with one voice actor, arguably the most famous voice in film: Don LaFontaine, the “voice of God.” He’s the most famously heard voice in trailers. I worked with him from 2005 until his passing in 2008. That’s when I realized this was a serious business I could be doing as a full-time business. I’d never had a client like that who needed the amount of attention and support—and had the budget—as he did. So I needed to shift my focus when I worked with Don. That was a minor miracle.

I didn’t know who he was when I walked into his house for the first time, but I could just tell he was successful. They’re always having to duck away for a job; take five or ten minutes, go into their booth, make a couple thousand and come out. He went into his booth and did a spot for The Simpsons, and I was like, “Oh, that’s who this is.”

I co-founded and designed a recording facility in Don LaFontaine’s memory: the Don LaFontaine Voice-over Lab at the SAG Foundation.

How does changing technology affect what you do?
Because it’s become possible to have a home studio and send audio files on demand over high-speed internet, it’s become easier for voice actors to work at home.

For me, there hasn’t been a leap in five or six years, since I’ve started. There’s a system that’s really only used in voice-over in radio—it’s ISDN. It’s a pretty old technology. It predates the Internet. It’s used to have a voice actor connected to a studio through a phone line in real-time. The sound quality is nearly as good as being in a studio. But ISDN is slowly fading away. The Internet is starting to fill its need, though it can’t do it as well. ISDN is extremely reliable. Internet stuff is not. You’re on a public internet connection with thousands of other users. We’re going through a transitional period, getting the Internet to fill what the ISDN technology is able to do.

Otherwise, everything’s getting cheaper. The equipment is cheaper than ever. Because of that, more and more people are trying to get into the business. To those who’ve read about it or gone to a voice-actor career presentation, it can be marketed as a great work-at-home business that almost everybody can do. There’s this huge pool of people getting injected into the industry.

With a small investment in equipment, and the right training and guidance—if you do that stuff right, almost anybody that has the skill can make a living. But you have to be business-oriented. If you’re not entrepreneurial, forget it. You have to be awesome at marketing yourself. Otherwise you’re just another person in your basement or closet with a mic. There are thousands and thousand of aspirational voice actors, a thousand professionals and a couple hundred who are very successful. You have to be entrepreneurial and business-minded to be very successful these days.

What do you love most about your job?
Helping people. I know that’s cliche. But when we get on a phone call, people are stressed out or confused or overwhelmed. I get off the phone in an hour, and it’s a completely different situation. They’re relieved, they’re excited, they’re ecstatic, they’re know what they have to do, and it’s not as difficult. That’s my job at the end of the day: Taking them from pain to pleasure. Ninety-nine percent of the time, when I get off the call, they’re better off than when we started. I really do like that.