The Rise and Fall of Business Answering Machines 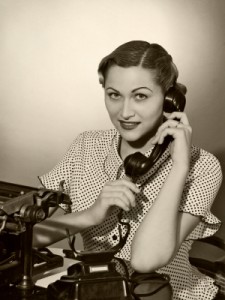 In a 1994 “Nightline” story called “Voice Mail Jail,” Ted Koppel encapsulates a then-prevailing ambivalence toward voice mail. “Love it or hate it,” he deadpans, “it appears to be another irreversible step along mankind’s journey toward God only knows what.”

Besides nearly cracking one of his unicorn-rare smiles, Ted Koppel nails the machine-service tech curve: It’s swung from relying on people to machines and, lately, back to people.

You see, before there were business answering machines, there were secretaries. These secretaries went to school to learn the fine arts of typing documents, taking messages and performing office tasks. Professional receptionists, knowledgeable about the company they represented, they presided over their desks with poise. They were adept at taking and relaying messages, but they were limited to office business hours.

The answering machine hit the business world in the 1970s and entirely changed the game. Now companies had a way to take messages regardless of the hour. Shortly thereafter, answering machines led to more sophisticated voice mail systems. While using them to record messages, companies also put them to use during business hours to replace the switchboard and route calls.

Though indispensable, voice mail has its flaws. Voice quality of recorded messages aren’t guaranteed. A caller’s potential as a lead is lost if their message isn’t clear. Voicemail systems also require maintenance; full in-boxes and mechanical failures have led to many a lost message. Some customers find voice mail off-putting. Studies show that a startlingly large majority of callers hang up when they reach a recorded message.

Ironically, Gordon Matthews, the inventor of voicemail himself, has been known to say, “When I call a business, I like to talk to a human.” At the time, this quote was an advertisement for his answering system. Now, it echoes the thoughts of those frustrated with modern-day answering systems.

Innovative companies are moving towards live systems that balance the human touch of a secretary with the convenience of a voicemail system. A live answering service can take messages with all the professionalism of a secretary, yet be available 24 hours a day. That truly combines the best of both worlds.