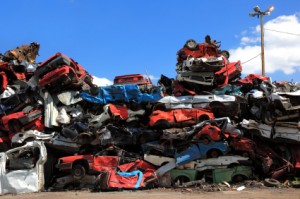 Earlier, we wrote about the 102, 826 gallons of gas AnswerConnect annually saves by enabling 272 of our employees to work from home. That seems like a lot of gasoline for one mid-sized company, but that’s merely one metric. How many cars does that keep from the waste stream? How does that lighten our company’s environmental impact?

Consider this quote from Energy and Equity by philosopher Ivan Illich (thanks to worldcarfree.net):

“The typical American male devotes more than 1,600 hours a year to his car. He sits in it while it goes and while it stands idling. He parks it and searches for it. He earns the money to put down on it and to meet the monthly installments. He works to pay for petrol, tolls, insurance, taxes and tickets. He spends four of his sixteen waking hours on the road or gathering resources for it. And this figure does not take account of the time consumed by other activities dictated by transport: time spent in hospitals, traffic courts and garages: time spent watching automobile commercials or attending consumer education meetings to improve quality of the next buy. The model American puts in 1,600 hours to get 7,500 miles: less than five miles an hour.”

Assuming one car per employee, let’s begin with the hard numbers.

Take 272 cars for each working-at-home employee and multiply that by 7,395 commuting-miles traveled (29 miles per day times 255 annual work days), and you get 2,011,440 annual commuting miles. Divide that number by the average lifespan of a vehicle, in miles (150,000 miles, according to Consumer Reports), to get 13.41 vehicles saved from the trash compactor or landfill.

Cool: 13.41 cars saved per year, simply by empowering 272 employees to work at home.

Disposing of a car—not extracting its raw materials, not shipping them, not assembling them, not driving the car; just, you know, throwing it away in a landfill—doesn’t stop its pollutants from entering the water table, soil, people’s bodies or the atmosphere. Again, from worldcarfree.net:

The thing is, numbers are measures, and measures have real weight behind them, affecting real humans. Enabling 272 employees to work from home isn’t a revolutionary act; it isn’t even technically difficult. We began this distributed work model because it’s efficient.

Only later did we begin realizing the social and environmental benefits of letting people work from their homes. Keeping 13.41 cars from the landfill each year is a 0.000017% drop in the bucket compared to the 77,857,705 new cars manufactured in 2010. But it’s a start. And we think we can do even better in the years to come.